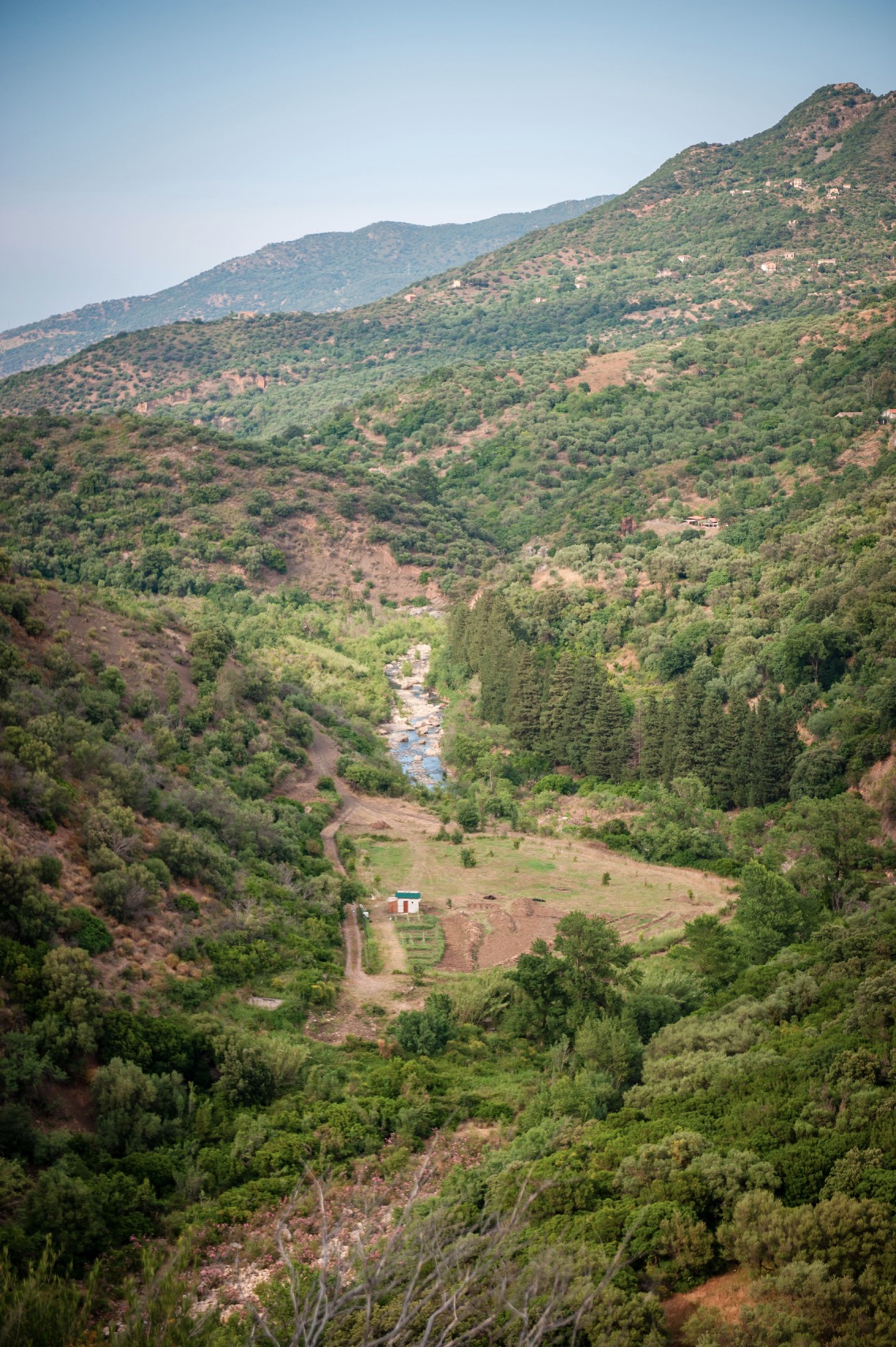 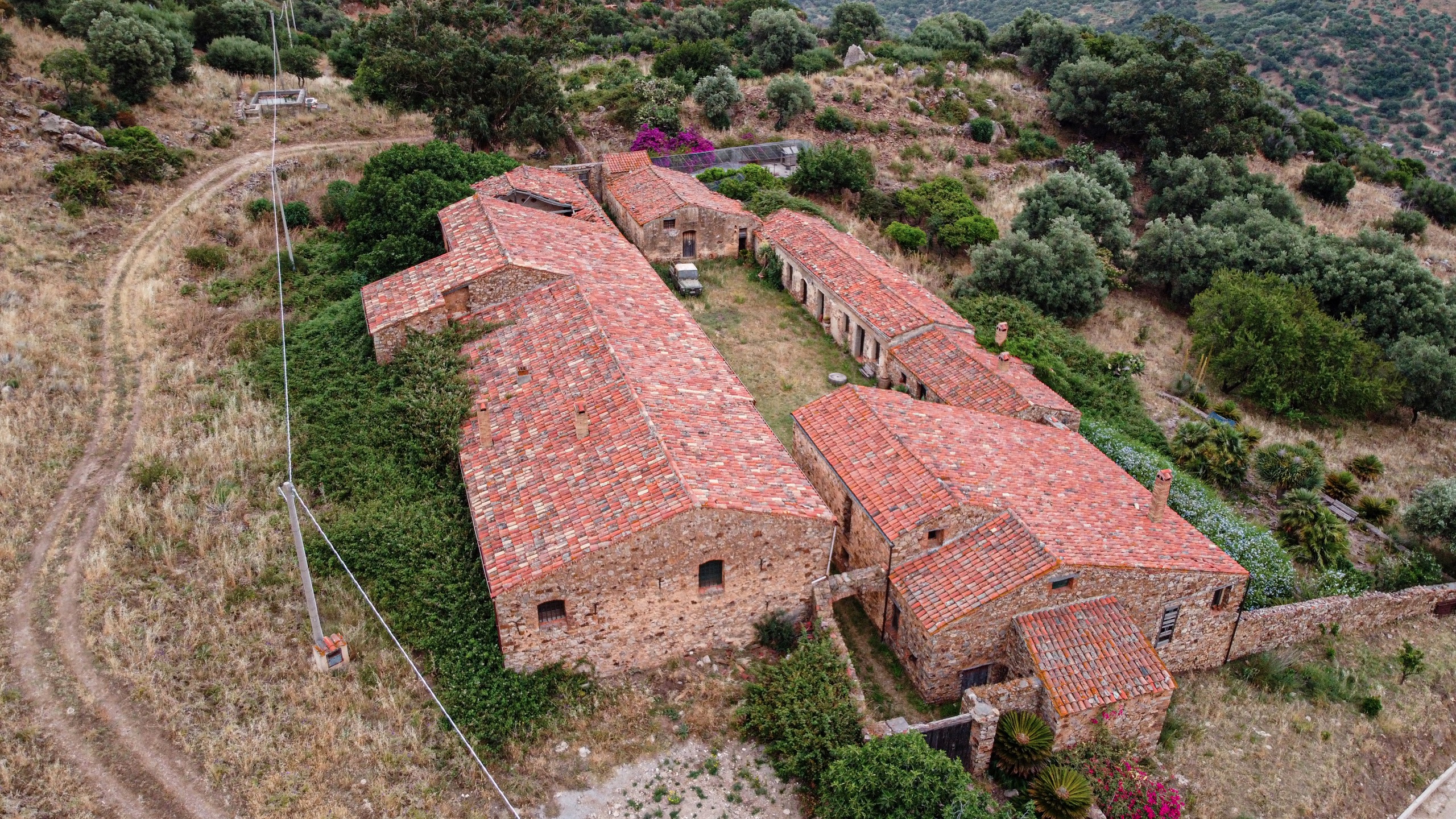 The area surrounding the company was divided into plots of land that were diversified by name: (little curiosity: there was a well-established border called "the struggle of Turrisi" since there was the border between Baron Turrisi and Duke De Spucches.)

The restaurant area is locaed in the “chian u’ trappitazz” so called due to the presence of an oil mill around the 1950s and 1960s.

With the arrival of a new landowner, the oil mill was destroyed and the stone was recycled for the construction of a stable. River, sand and cement from the houses of Gliastro were transported by two donkeys, who worked day and night with the workers and the landowner, until the work was successful.

The farmhouse, around the 50s-60s, hosted 60 workers from Gioiosa Marea involved in the olive harvest of the area.

The "chian u’ piraniu" camper/tent area is named because of many pear trees.

On the spot there was an haystack, a sign of the world, that of the shepherds; it is a characteristic pile of straw stacked around a central pole to form a cone. The haystack struggled to survive in the mountains of the Madonite territory, it suggests to the visitor images of a not very distant past, now almost forgotten.

Not far beyond the camper/tent area “u chian a napiruddra” so called because, even today, there is a vast vegetation of napordi.

In the Marcatogliastro area there are some wild goats because ,around the 1960s, the territory of the Gole di Tiberio Agricamping was leased to a shepard from San Mauro Castelverde for grazing goats. Unfortunately or fortunately some of these goats escaped and from that moment they reproduced in captivity, but you can still find them in the area. 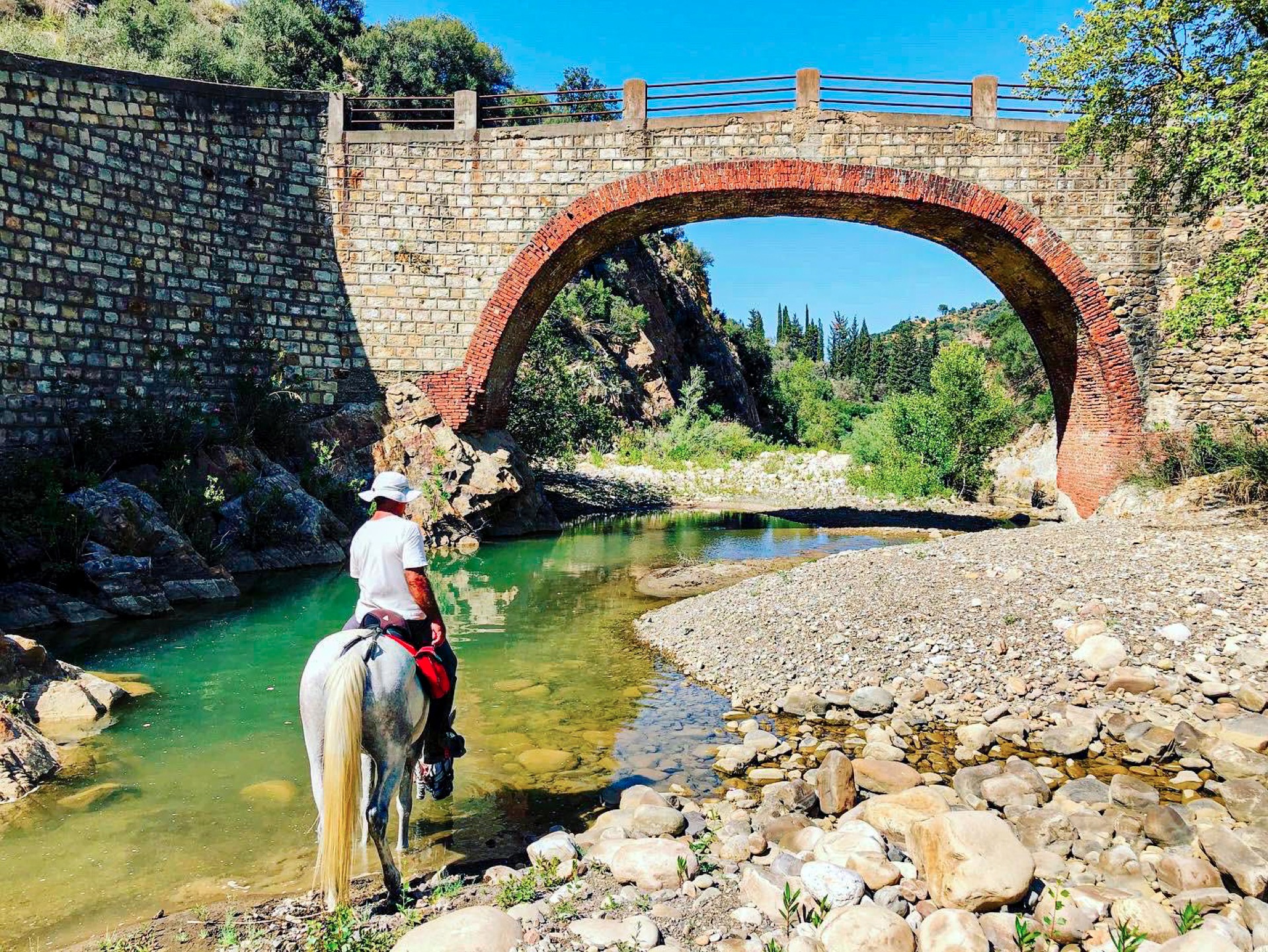 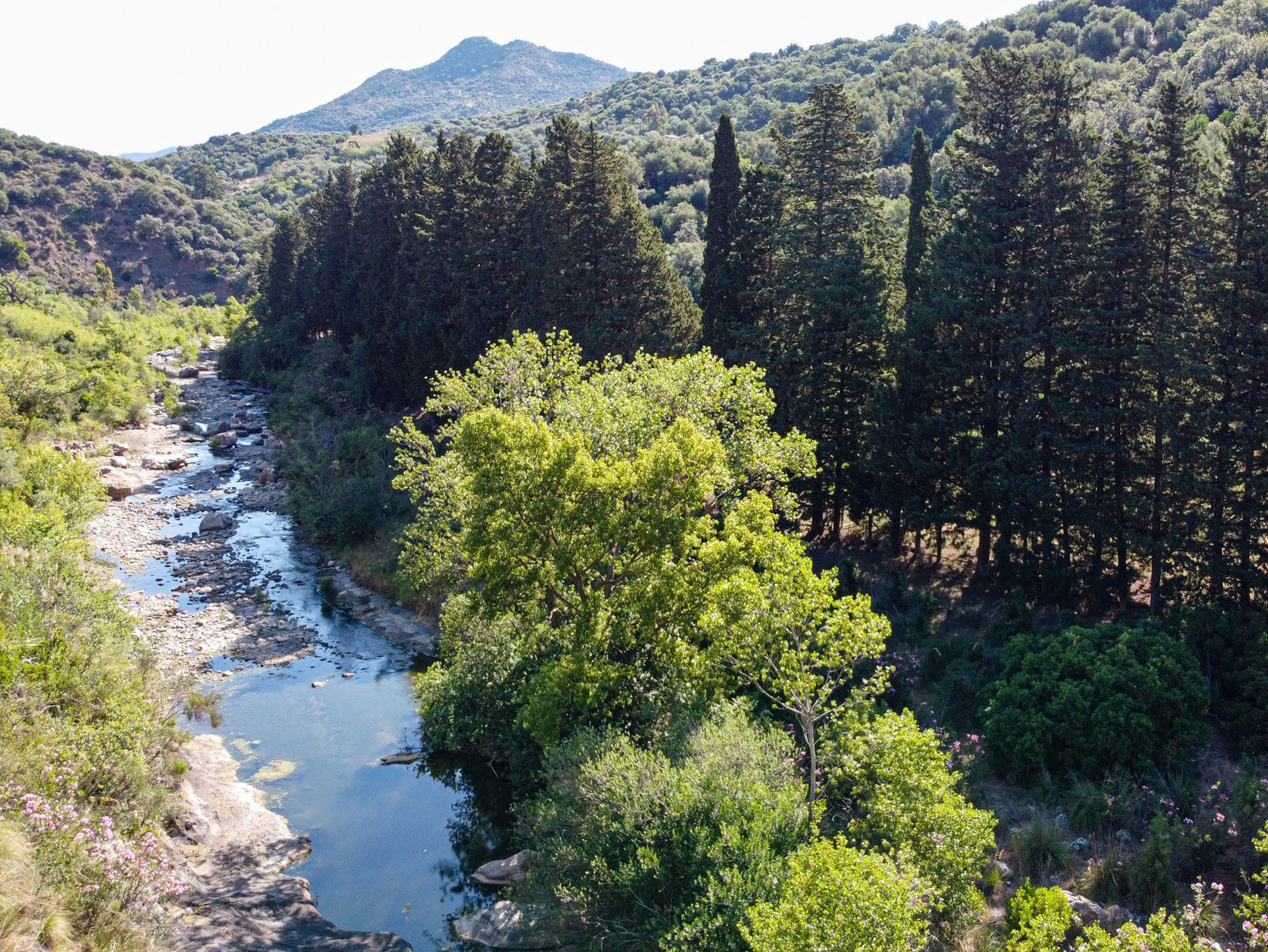 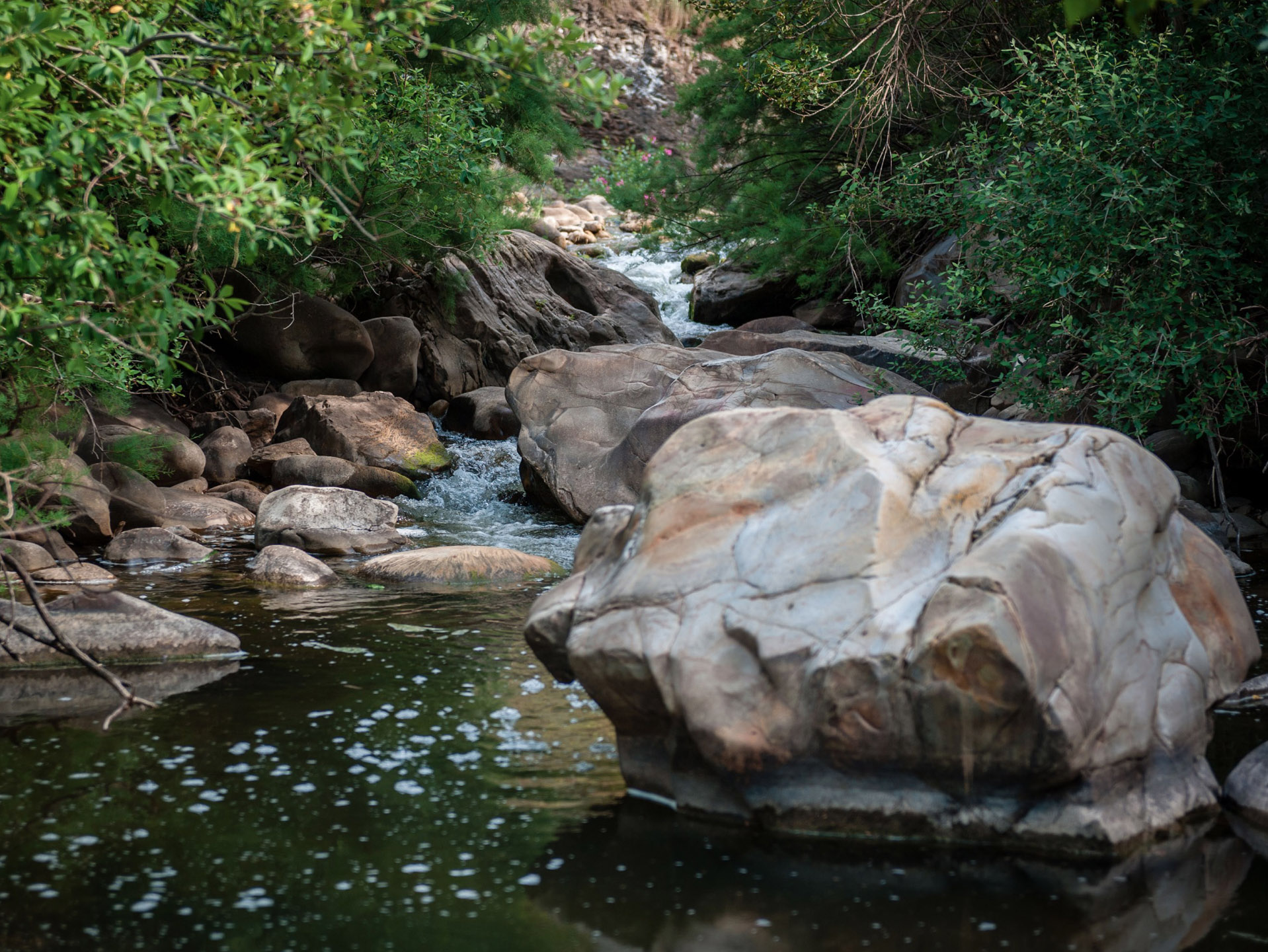 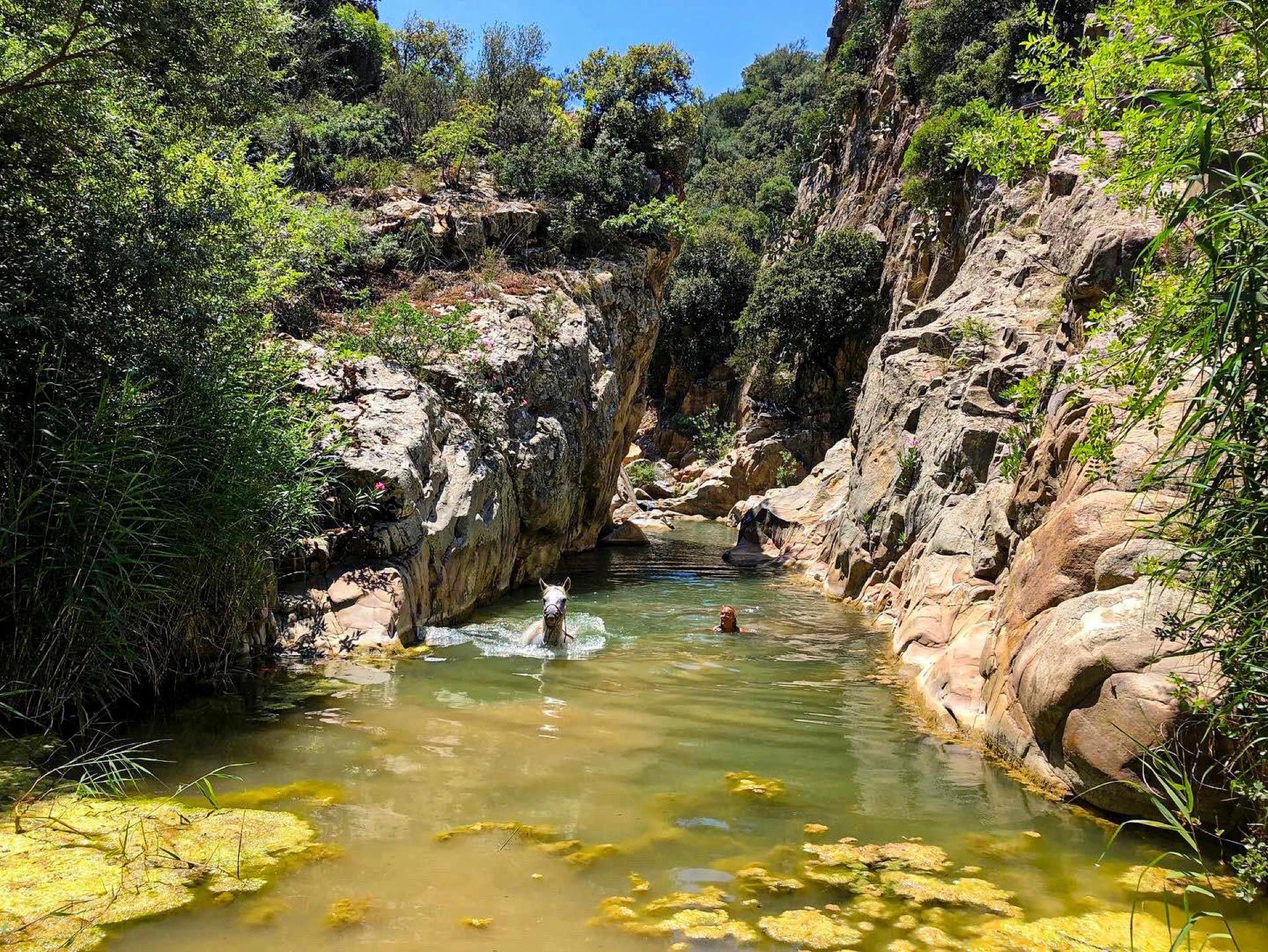 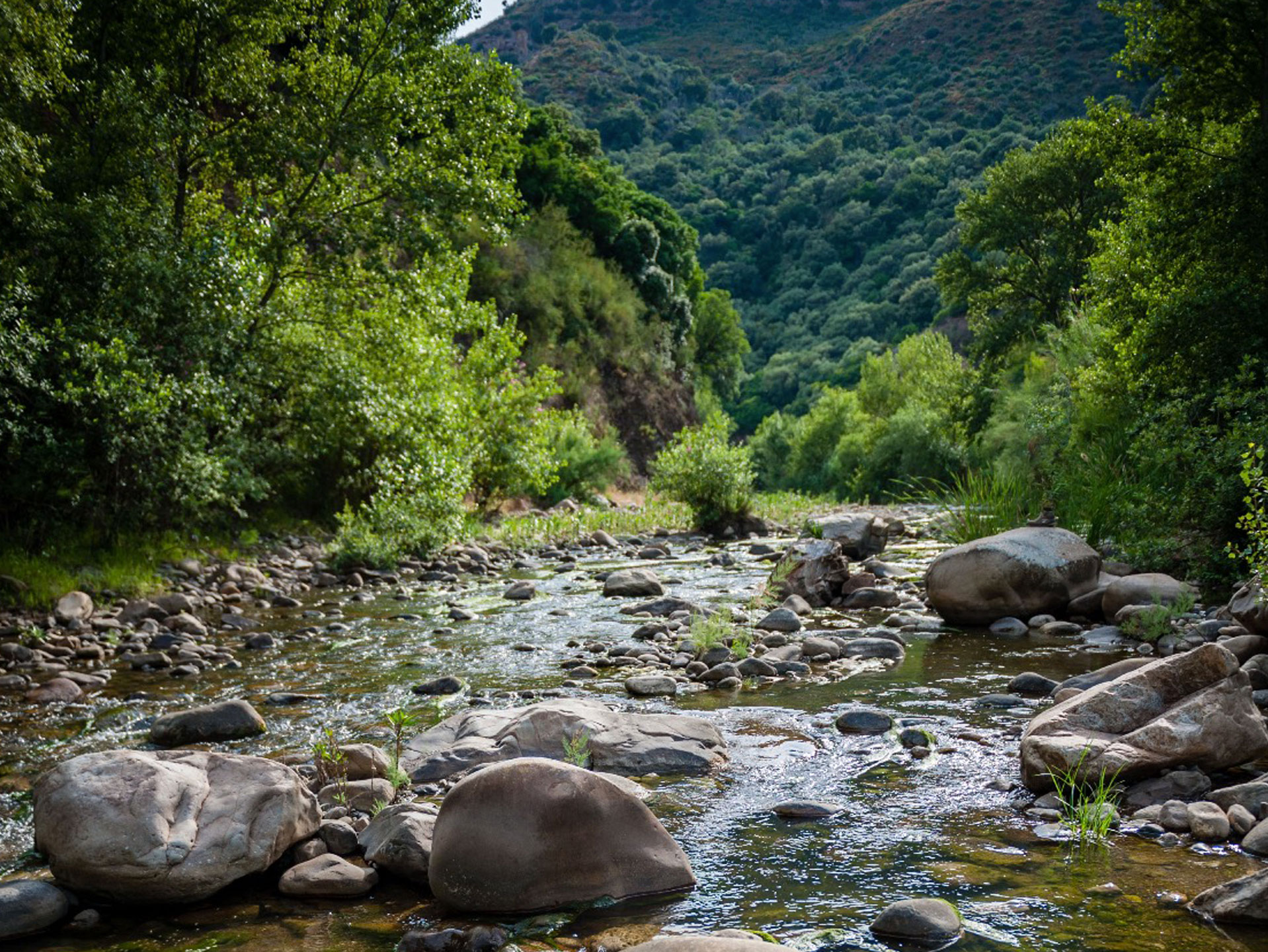 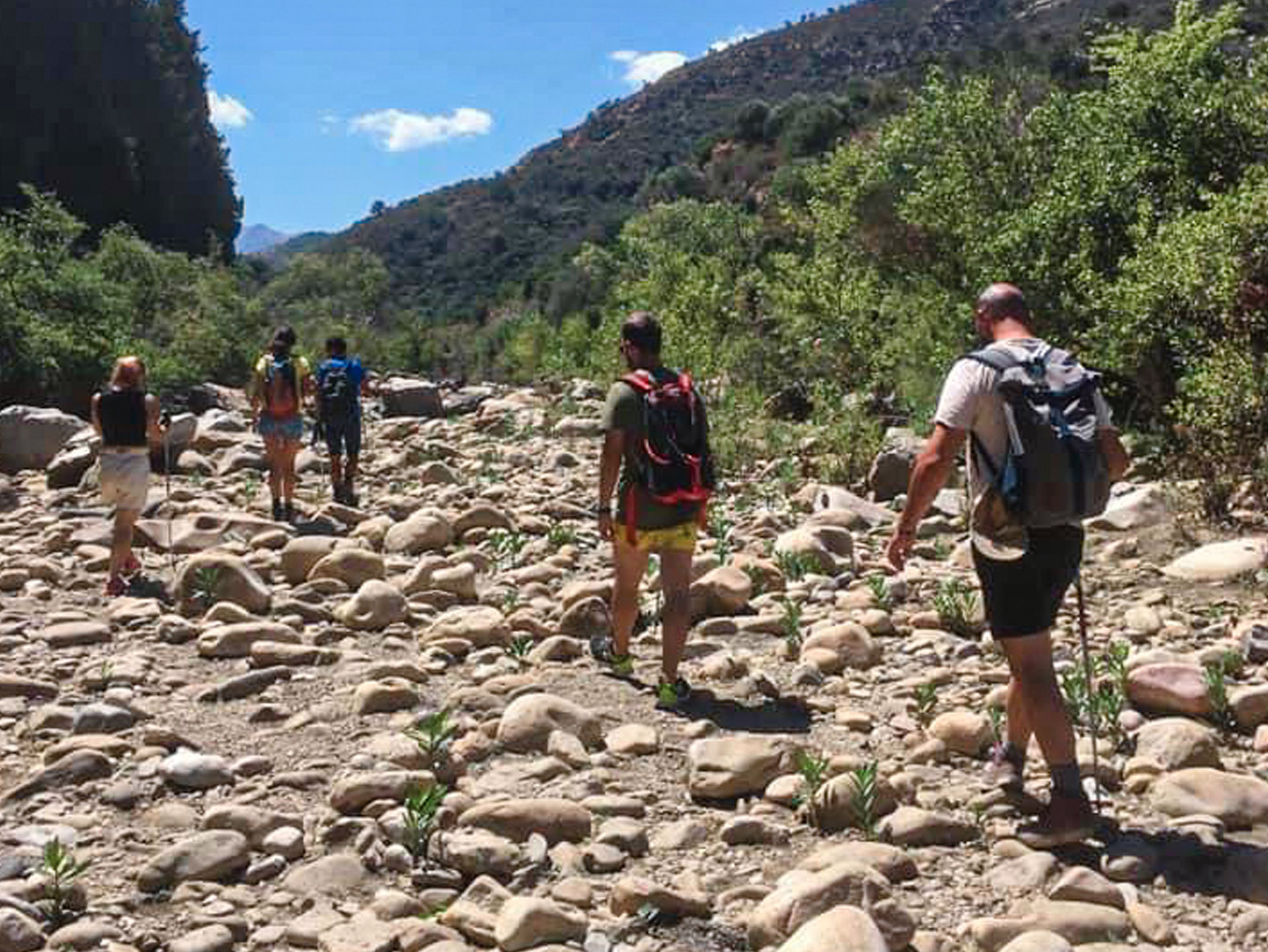 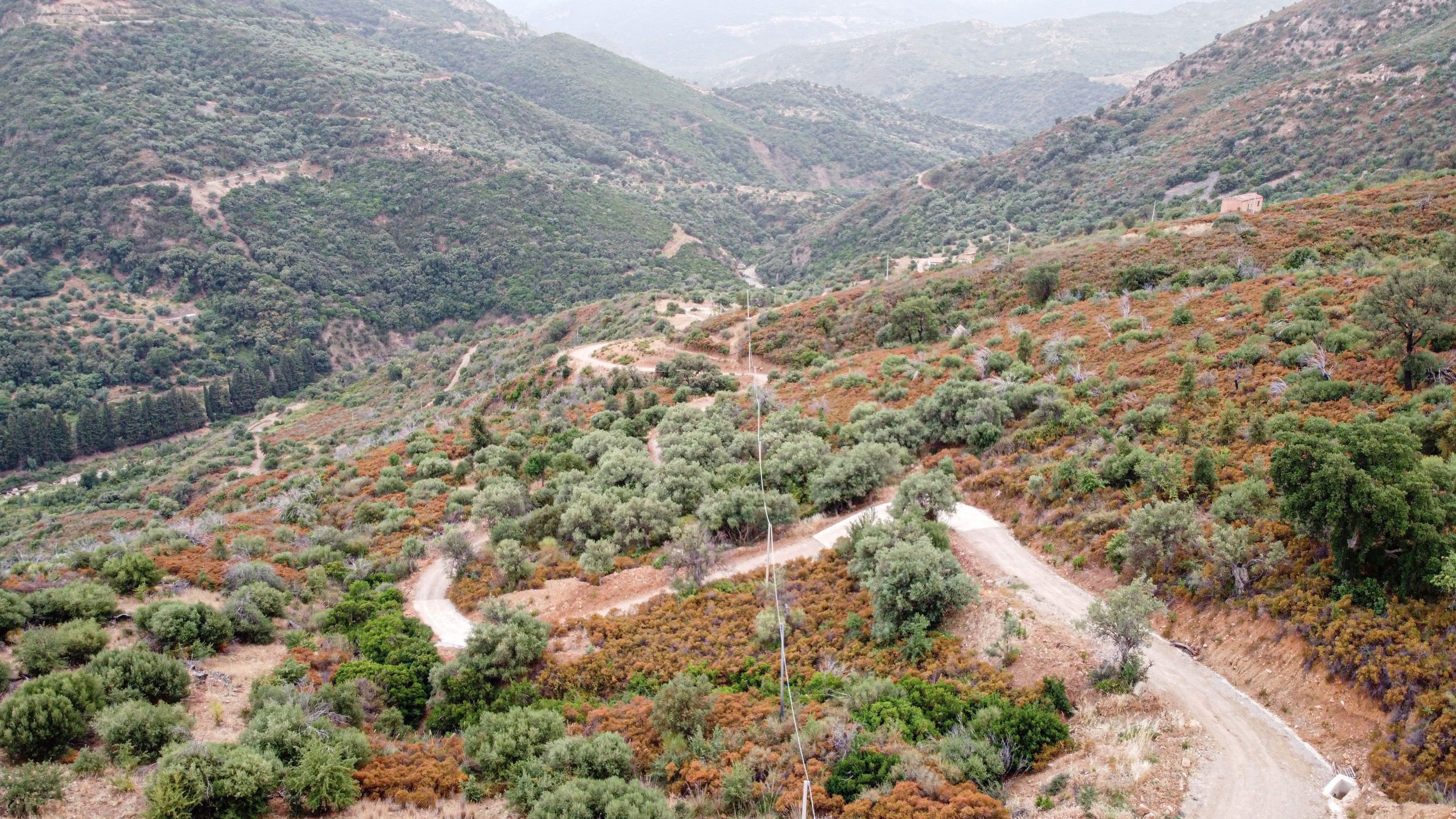 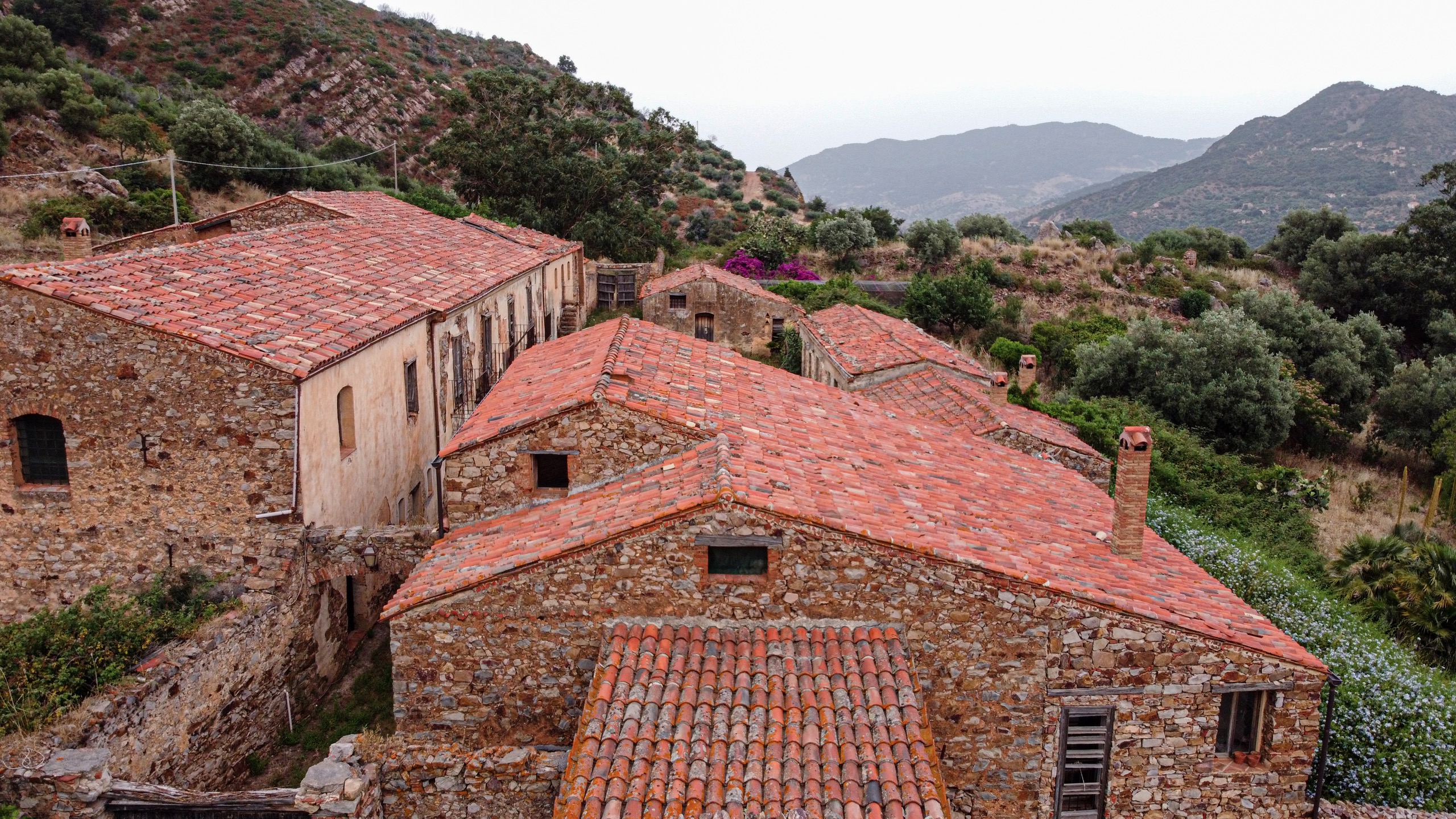 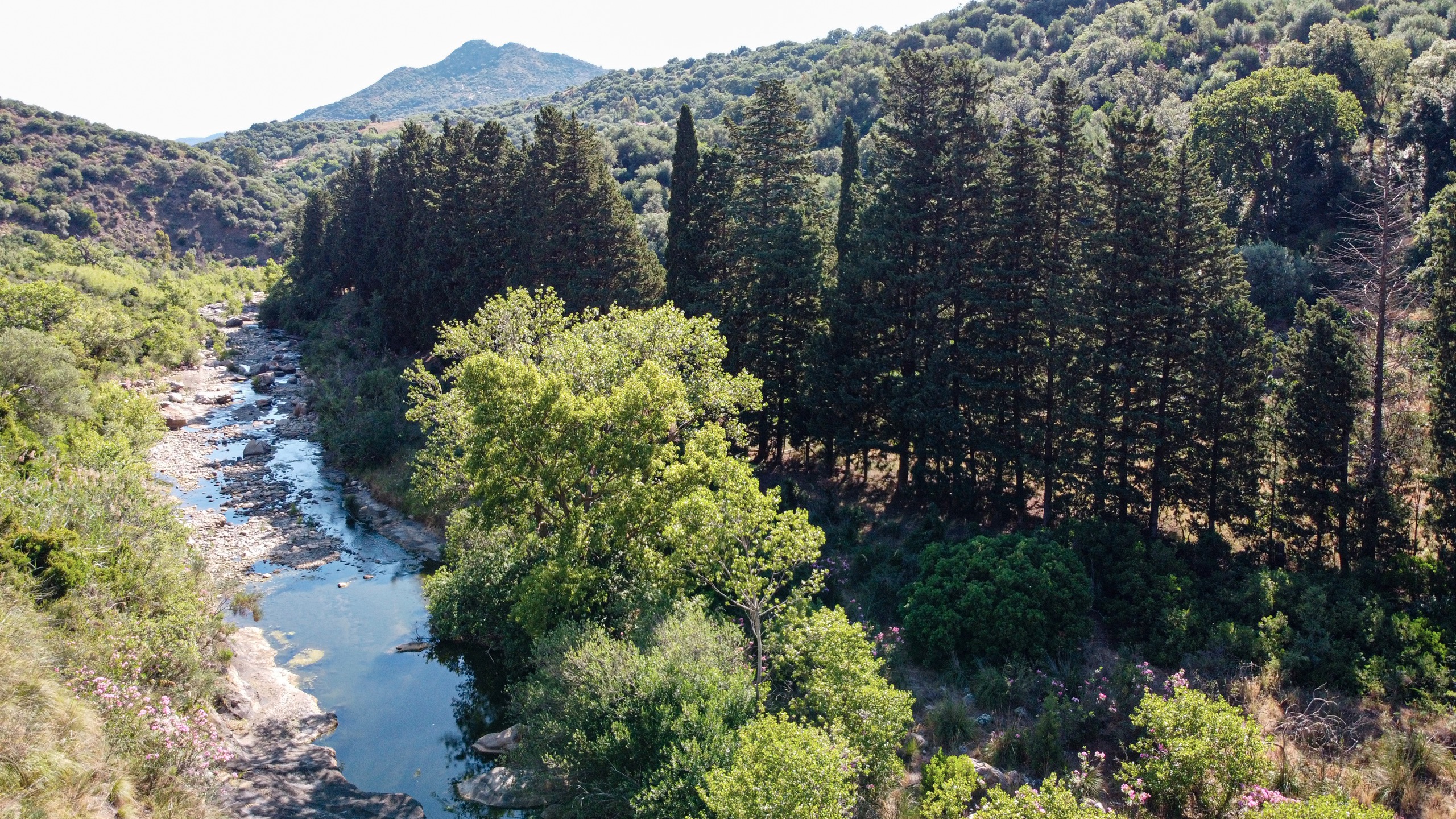 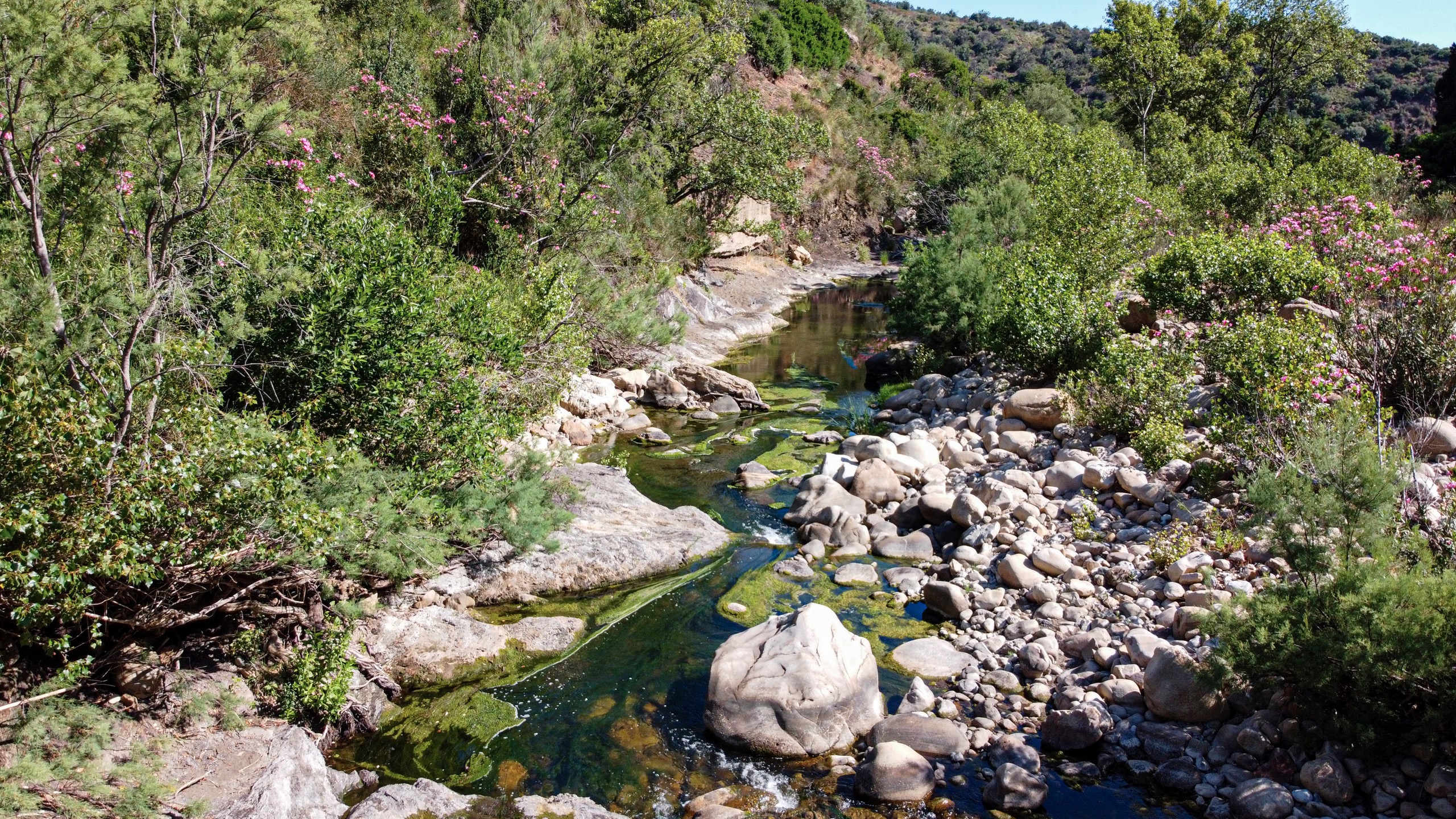 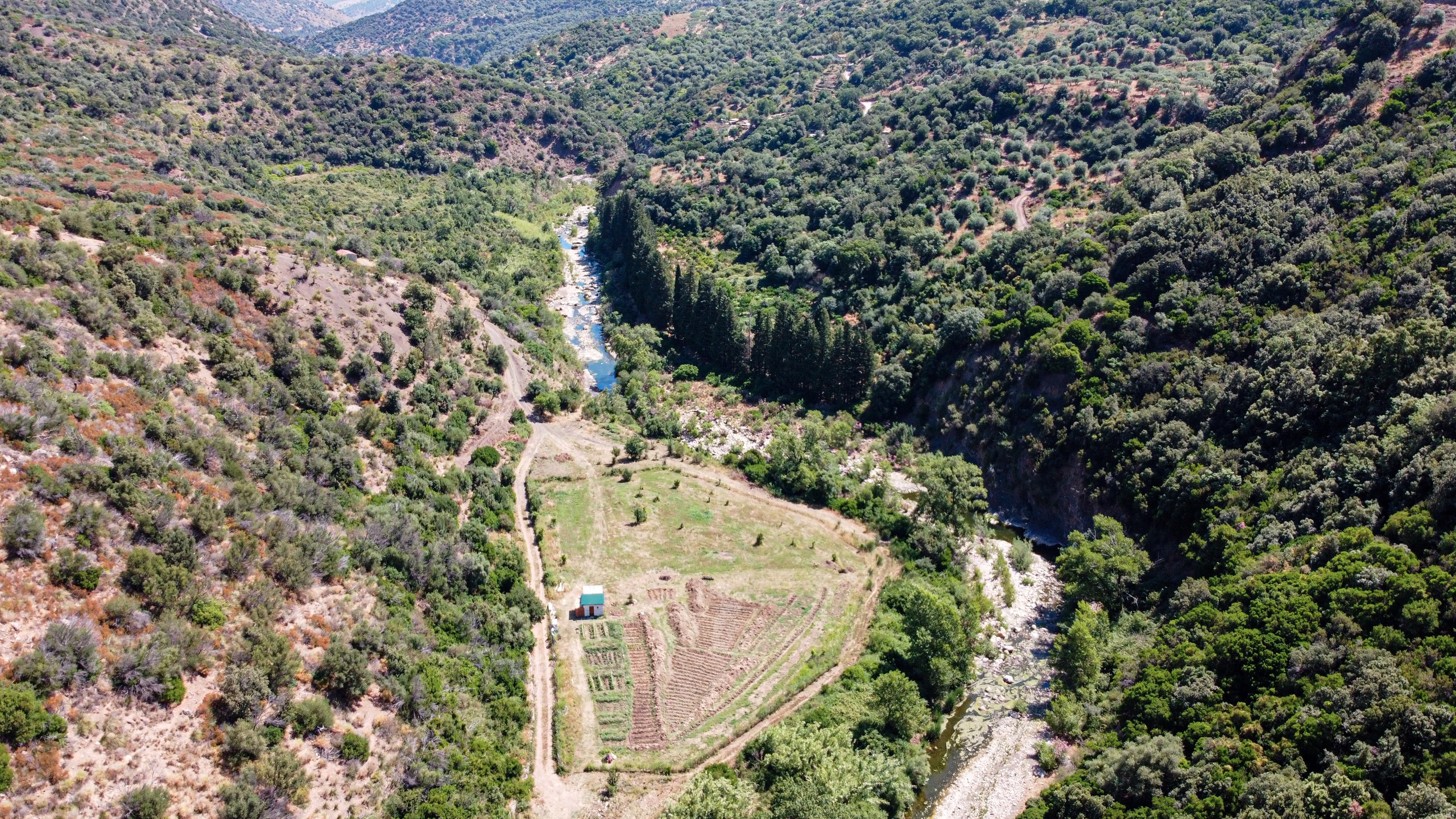 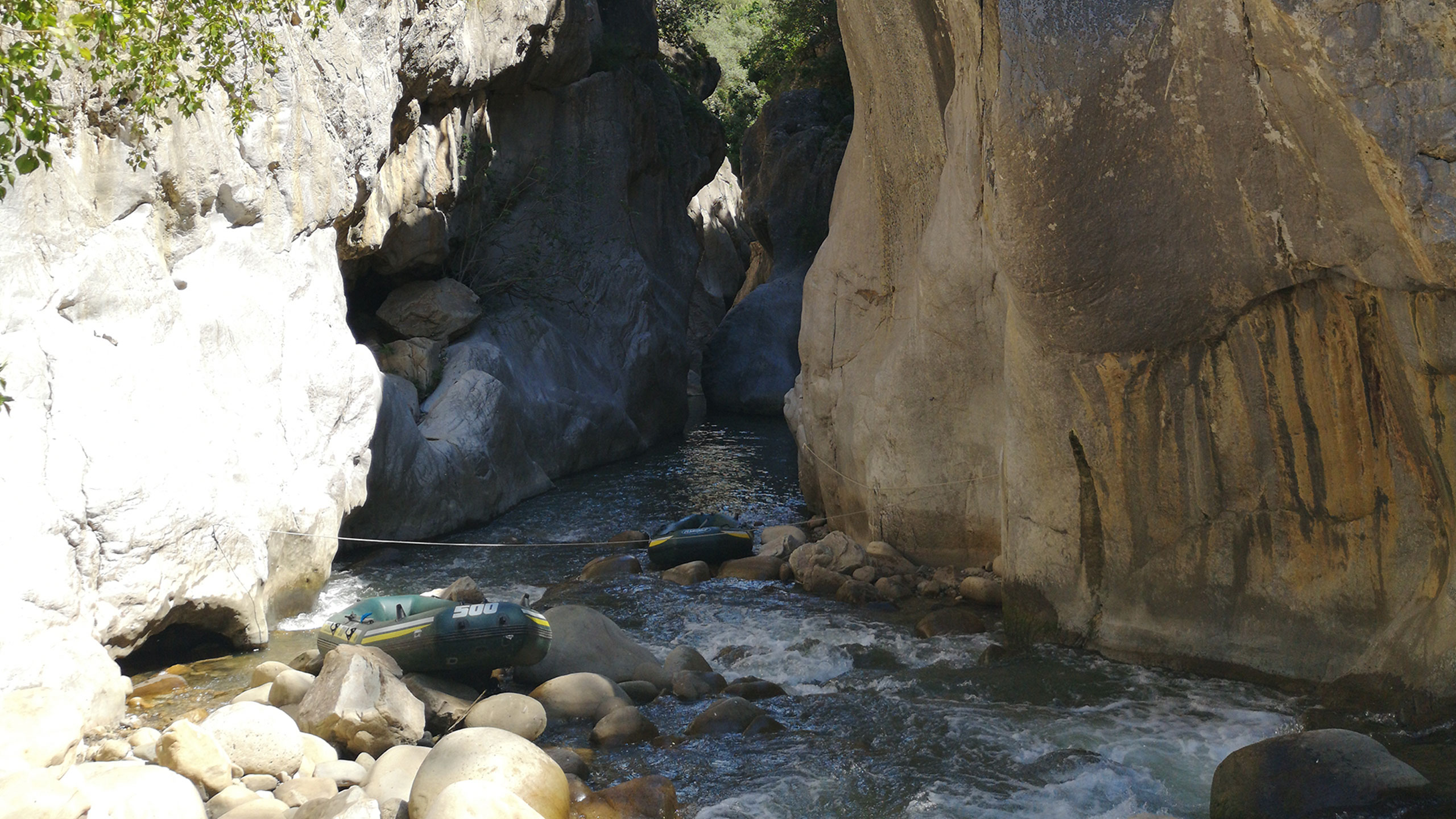 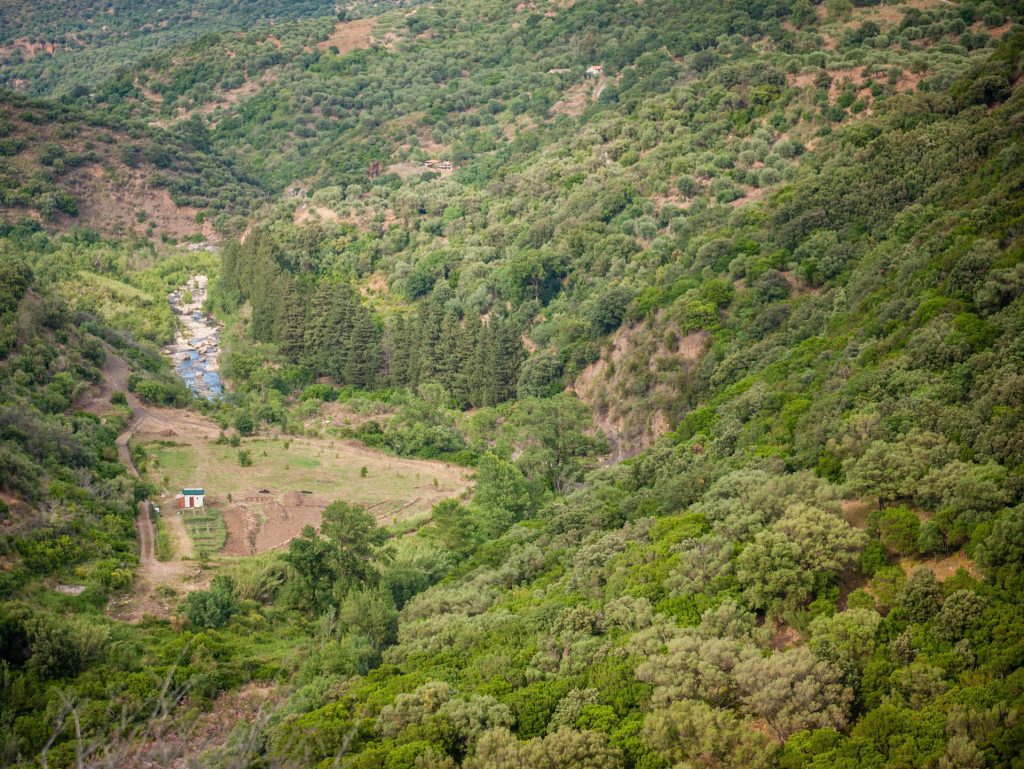 Inside the Madonie Park, specifically in the Marcatogliastro area, we find a vast assortment of flora, including: prickly pears,, star viper, Gasparrini broom, cardoon, Asparagus acutifolius (characterized by particularly pungent leaves), napordi (from which the so-called "napruddri" are obtained, similar to thistles but sweeter), thorny sparzio Calitome spinoso, typical thorny shrub known as "Alastru" with yellowish flowers, isolated or gathered in groups; which give an achromatic impact beautifying large areas of the hill), Cistus Salvifolius ("risedda" has a bushy appearance. The flowers have the appearance of white roses with yellow shades, at the base of which the "risedda" mushroom similar to the black porcini spontaneously arises), Hypericum perforatum (Hypericum or St. John's Wort, is a semi-evergreen perennial medicinal plant belonging to the Clusiaceae family (Guttiferae) and to the Hypericum genus. traditional medicine due to its phytotherapeutic properties, in particular the antidepressant and antiviral ones. The origins of its use as a medicinal herb are very ancient and traces of it can be found in the writings of many centuries ago), secular olive trees which characterize the surrounding area of ​​the Agricampeggio Gole di TIberio , Ramsons (Allium ursinum, is a bulbous plant, herbaceous, perennial, erect not very tall, with white flowers and broad, delicate and silky leaves, with a pungent garlic odor. It belongs to the Liliaceae family), Papaver rhoeas (commonly known as common poppy or rosolaccio), Mallow (it is a plant belonging to the Malvaceae family. The name derives from the Latin mallow meaning soft, because its emollient properties are known since ancient times), Acanthus (it is a genus of plants of the Acanthaceae family, native to the Mediterranean regions.) Ipomoea (it is a genus of the Convolvulaceae which includes about 500 species known as the vernacular name of bells), Vicia (known as "Veccia" is a plant belonging to the Fabaceae family), Echium plantagineum (Viperina Piantaginea is an annual herbaceous plant of the Boraginaceae family), Colchicum (false saffron, poisonous but recognizable), Wild Saffron (Carthamus Ianatus), Field Chrysanthemum (Glebionis segetum), Apple, Pear, Cherry, Poplar, Oak , Cork, Lemon, Orange. 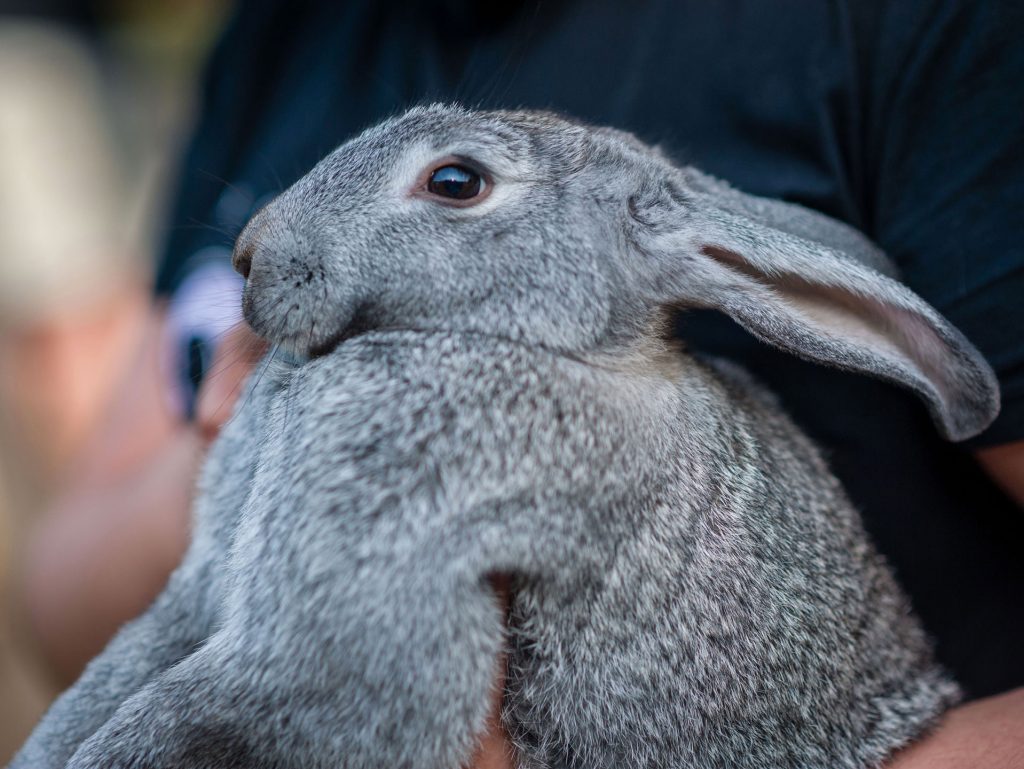 As for the fauna, we find: fox (vulpes vulpes), weasel (mustela nivalis) known as "piddrotta", hedgehog or porcupine (erinaceus europaeus), hare and wild rabbit, black pig (sus domesticus) or cinghiomaiale (it is a animal that can reach considerable size, a spontaneous hybrid between wild boar and pig), land turtles, black biacco “scursuni nivuru”, viper (it is distinguished from other snakes due to its triangular head and has a gray color with rhombuses neri), “tira ciautu” known as Gongilo or Tiro, (Chalcides ocellatus, is a small saurian belonging to the Skink family, it is a wild animal, at the sight it would seem a snake but with legs), Green frogs, Gecko (also known as "libbrusa lizard") Toads, Partridge, Golden Eagle, Griffin, Hawk, Heron, Owl, Barn Owl, Bee-eater, Goldfinch, Robin, Sparrow, Woodpecker, Saturnia del Pero, Saturnia pyri (saturnia del pero or pa vonia maggiore, owes its common name to the fact that the caterpillars feed mainly on pear leaves, but also on apple, apricot, walnut, poplar, cherry), Macroglossa ("lapunieddu i sant'antoniu" it is a butterfly of genus Sphinxes which, according to popular tradition, is a flower box of good news), Anguilla, Snake, River crabs (fairly protected endangered species). 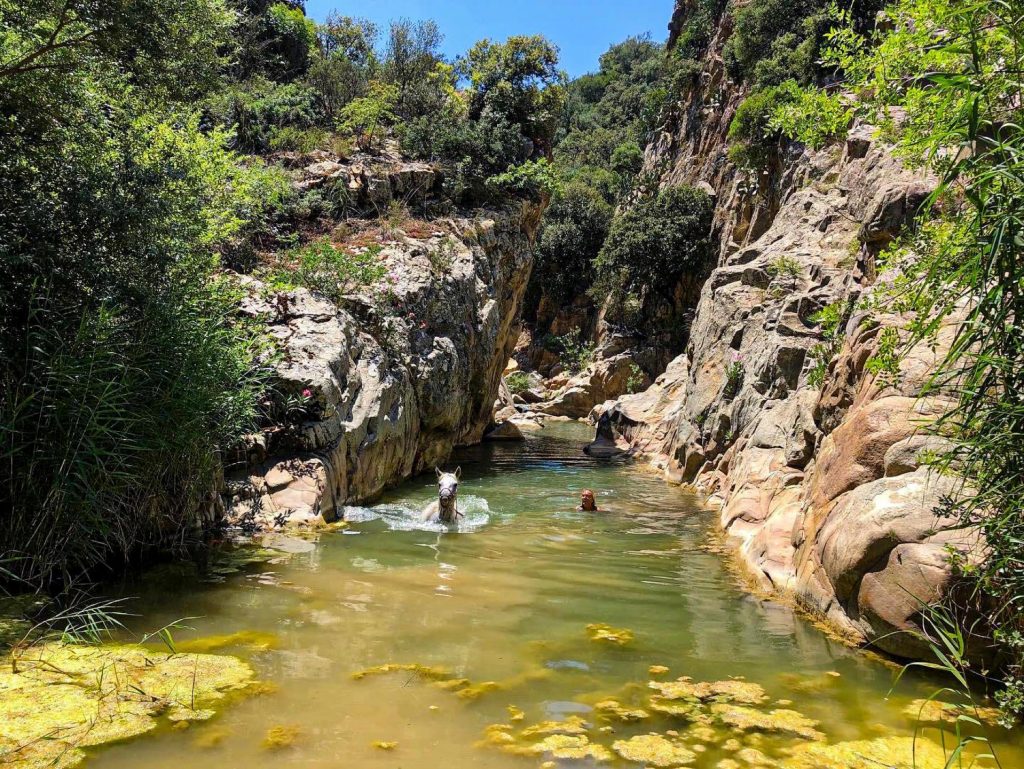 THE GORGES OF TIBERIO

The Gorges of Tiberius are the natural representation of a small canyon, called “miriculu” in castelbuonese dialect (ancient local word with the meaning of "navel", represents the point where the two rocks meet). In the initial part, some rocks seem to take on anthropomorphic features, especially in reference to the oral tradition that tells of the presence of the "monster" (the guardian of the place imprisoned by evil spirits) it is said that there was a secret passage for the brigands, who had hidden a legendary treasure. Gorges owe their name to the emperor Tiberius. Story goes that there was a Roman villa dedicated to the emperor there, he was a Roman emperor belonging to the Julio-Claudian dynasty, the second of the latter. 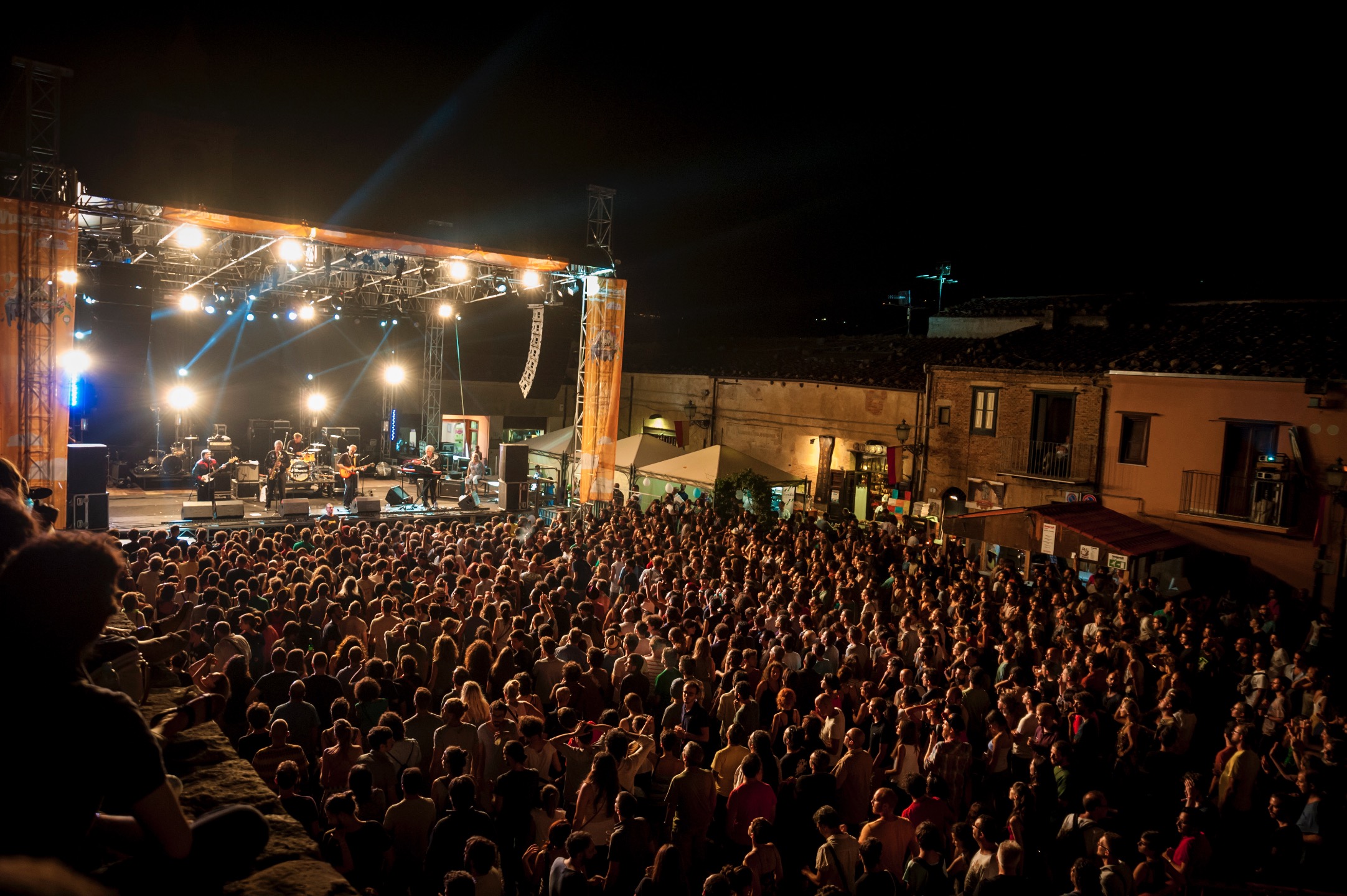 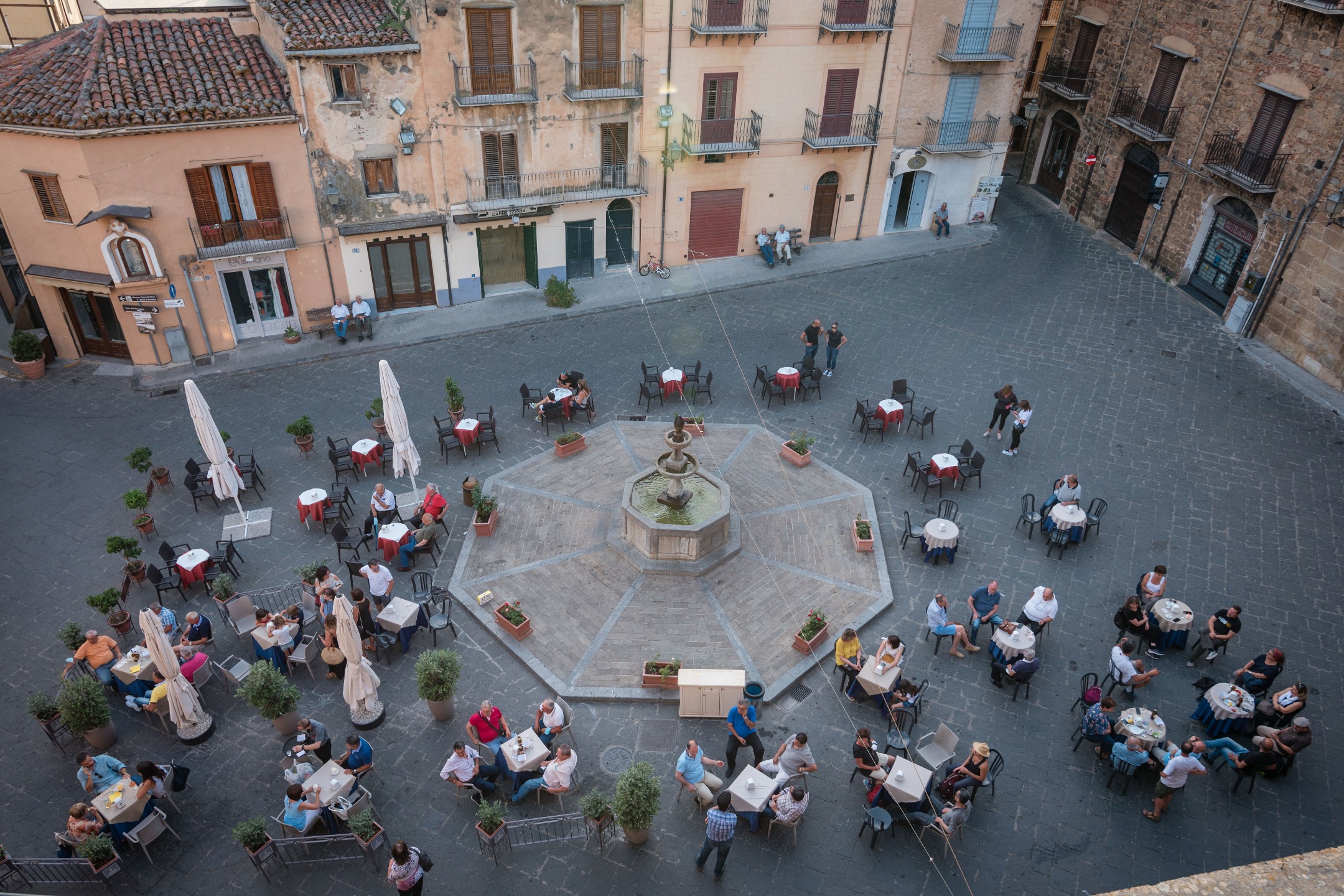 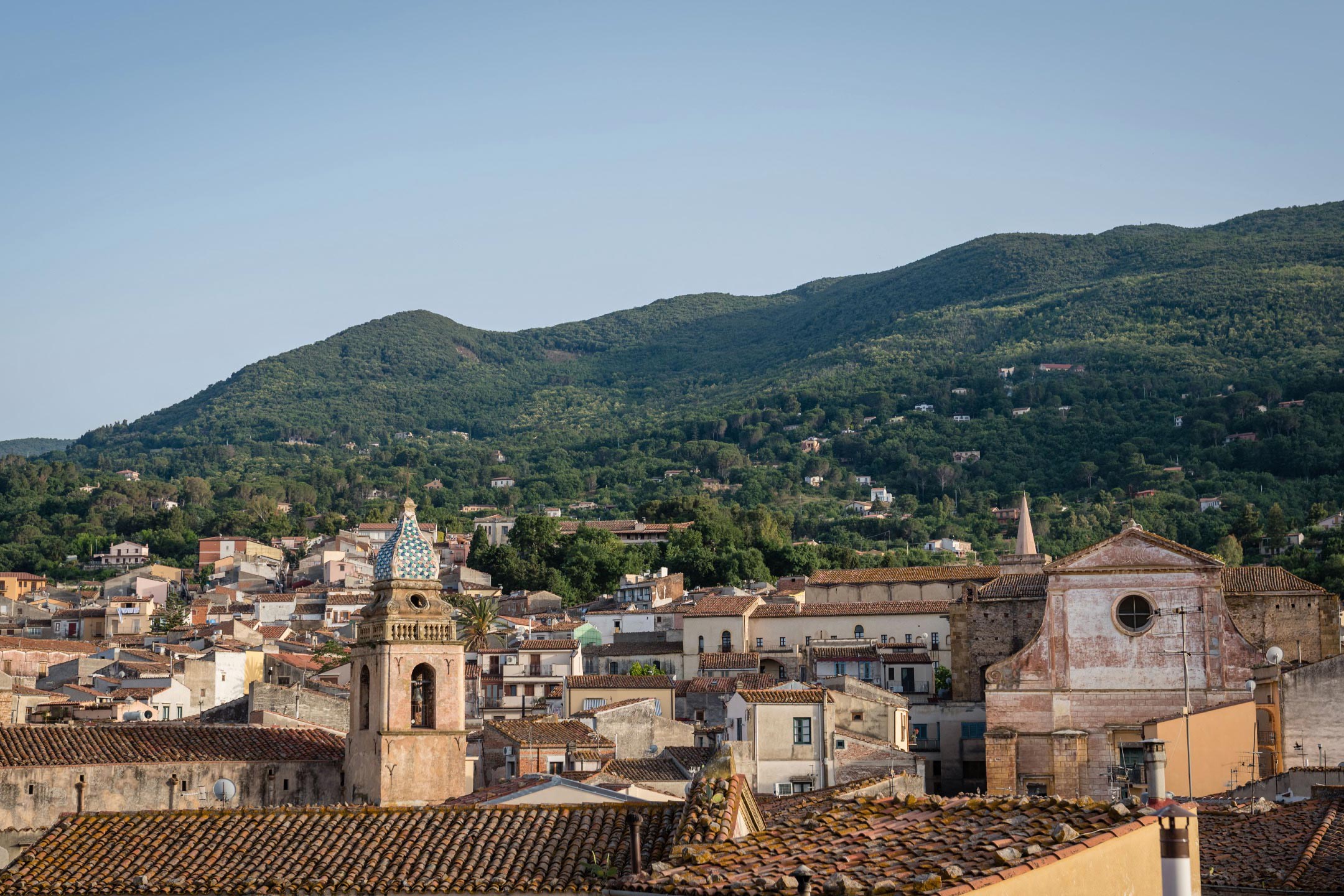 The company is located in Castelbuono, inside the Madonie Park. Castelbuono is a fascinating ancient medieval village, where you can spend a pleasant holiday tasting the typical food and wine products of the area; a town that offers all the necessary services to spend an exciting stay. There are musical events such as: Ypsigrock Festival, Jazz Festival, Castelbuono Classica; and eno-gastronomic events such as: Divino Festival, Funghi Festival and many other festivals that enhance the cultural history of the village. The patronal feast dedicated to Sant'Anna (end of July), a symbol of "castelbuonesità", is really suggestive, characterized by a historical procession in medieval clothes and an active nightlife full of music, events and much more. In this regard, it's important to be noted that the company is 200 meters from the Gorges of Tiberius, which are located on the border between Castelbuono and San Mauro Castelverde, divided by the Pollina River. The "Fiumara of Pollina" is located after the congruence of the Vallone dei Molini (Geraci Siculo), receiving the Castelbuono stream and the Buonanotte stream.
Utilizziamo i cookie sul nostro sito Web per offrirti l'esperienza più pertinente ricordando le tue preferenze e le visite ripetute. Cliccando su “Accetta tutto” acconsenti all'uso di TUTTI i cookie. Tuttavia, puoi visitare "Impostazioni cookie" per fornire un consenso controllato.
SELEZIONA COOKIES • COOKIES SETTINGACCETTA COOKIES • ACCEPT ALL
We use cookies on our website to offer you the most relevant experience by remembering your preferences and your visits. By clicking on "Accept all" you consent to the use of ALL cookies. However, you can visit "Cookie Setting" to provide controlled consent.
Manage consent

This website uses cookies to improve your experience while you navigate through the website. Out of these, the cookies that are categorized as necessary are stored on your browser as they are essential for the working of basic functionalities of the website. We also use third-party cookies that help us analyze and understand how you use this website. These cookies will be stored in your browser only with your consent. You also have the option to opt-out of these cookies. But opting out of some of these cookies may affect your browsing experience.
Necessary Sempre abilitato
Necessary cookies are absolutely essential for the website to function properly. These cookies ensure basic functionalities and security features of the website, anonymously.
Functional
Functional cookies help to perform certain functionalities like sharing the content of the website on social media platforms, collect feedbacks, and other third-party features.
Performance
Performance cookies are used to understand and analyze the key performance indexes of the website which helps in delivering a better user experience for the visitors.
Analytics
Analytical cookies are used to understand how visitors interact with the website. These cookies help provide information on metrics the number of visitors, bounce rate, traffic source, etc.
Advertisement
Advertisement cookies are used to provide visitors with relevant ads and marketing campaigns. These cookies track visitors across websites and collect information to provide customized ads.
Others
Other uncategorized cookies are those that are being analyzed and have not been classified into a category as yet.
ACCETTA E SALVA